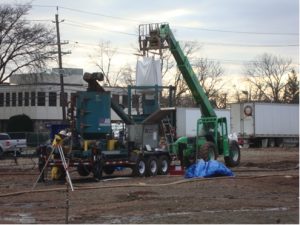 The work conducted at a former dry cleaner operation in River Edge, New Jersey exemplifies the technical expertise that EXCEL brings to a project that is in need of strategic redirection onto a path toward closure and meeting the client’s goals for property redevelopment.  The former dry cleaning tenant operation resulted in a significant discharge of tetrachloroethene (PCE) to soil and groundwater within the bedrock of the Passaic Formation.  Prior to EXCEL being retained, over 10 years of investigation documented chlorinated volatile organic compound (CVOC)-impacts to soil and groundwater beneath the Site.  Mischaracterization of the Site geology and hydrogeologic framework had resulted in the project becoming stagnant with no clear direction to efficiently close the project and allow redevelopment to proceed.

The owner and developer of the property retained EXCEL to evaluate data previously generated by others and to complete the investigation to determine the most cost efficient and effective alternative to remediate the property so that redevelopment could proceed in an aggressive timeframe.  The Developer had already obtained Site-plan approval for the proposed development which is to become the first development project in this portion of River Edge and is intended to spur the downtown renaissance envisioned by the municipality.  The Developer had specific timelines that had to be met before building construction could proceed therefore the remediation of CVOCs in soil and groundwater had to be completed on an expedited basis and with a high probability of success.

Based on the historic data generated during the previous investigations, EXCEL developed a focused work scope to fill key data gaps and collect the information necessary to evaluate remedial action alternatives.  In order to expedite the project, EXCEL took advantage of new regulations under the Site Remediation Reform Act (SRRA) by opting into the Licensed Site Remediation Professional (LSRP) program.  EXCEL used the existing and newly collected data to re-characterize the Site and develop a conceptual site model (CSM) of the underlying geology and hydrogeology.  Using the CSM, EXCEL evaluated the distribution of CVOCs in soil and groundwater, examined the lateral and vertical flow pathways within the underlying fractured bedrock of the Passaic Formation, and developed a remedial action approach to address impacted soil and groundwater quality.

Between September 2011 and March 2012, Excel implemented remedial action that included the following components: